What the Fed is Watching

What the Fed is Watching

(See Beware The Ides of March) While we pay close attention to WIRP, it’s not the only data point pointing towards higher interest rates.

Just about every Federal Reserve comment, whether written or spoken by a Federal Reserve Bank member, states that future decisions are “data dependent”. Taking them at their word, we see across the board that recent economic data has been strong, and continually improving from the last rate hike in December 2016. For example, the latest Institute for Supply Management’s monthly Manufacturing Business Survey, released on March 1, said that “economic activity in the manufacturing sector expanded in February, and the overall economy grew for the 93rd consecutive month.” If the Federal Reserve is truly data dependent then we should expect multiple rate increases this year. Here is a cheat sheet of some of the key macro data points that will factor into Fed interest rate policy:

From the table above we can see both inflation and employment continue to rise. But if there was any remaining uncertainty about another interest rate increase this week, the March 10 employment report answered that question with certainty when February non-farm payrolls increased 235,000 versus a consensus expectation of 225,000.

On March 3, Fed Chair Janet Yellen confirmed that the March hike was appropriate if growth holds: “At our [FOMC] meeting later this month, the Committee will evaluate whether employment and inflation are continuing to evolve in line with our expectations, in which case a further adjustment of the federal funds rate would likely be appropriate.”  Recently three Fed governors also took a more hawkish stance toward a March rate hike. Governors William Dudley (New York), John Williams (San Francisco) and Patrick Harker (Philadelphia) all indicated their willingness to raise rates at the March 14-15 FOMC meeting. Fed Governor Lael Brainard (Washington DC) also went from inflation dove to hawk last week in a Harvard speech: “We are closing in on full employment, inflation is moving gradually toward our target, foreign growth is on more solid footing and risks to the outlook are as close to balanced as they have been in some time.”

All indications are that the Federal Reserve is embarking on a potentially long path of rising interest rates, and fixed income markets are just now beginning to consider the consequences. Sometimes a longer term view can help put things in perspective. Last week the yield on the 10 year treasury bond broke above 2.6%. We are watching the 3.0% as a key level. We aren’t alone. In a webcast in January Jeffery Gundlach of DoubleLine Capital stated: “Almost for sure we’re going to take a look at 3% on the 10-year during 2017, and if we take out 3 percent in 2017, it’s bye-bye bond bull market. Rest in peace.” 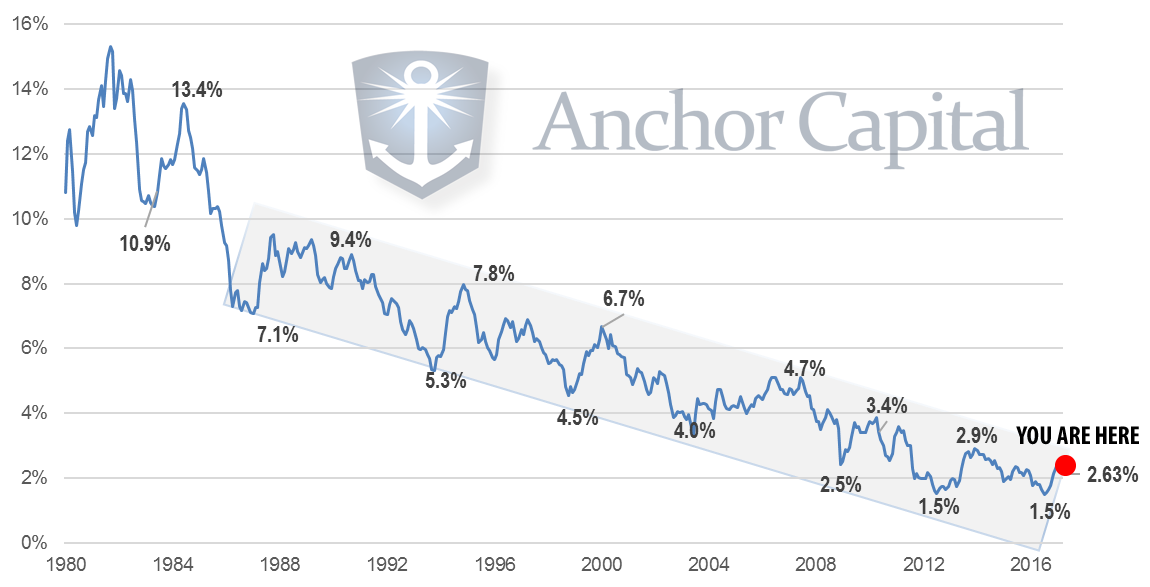 When interest rates go up, bond prices go down. It’s simply how fixed income markets work. Regardless of the exact timing and number of rate increases by the Federal Reserve in 2017, the data is indicating that we are likely entering a prolonged period of rising rates, threatening an end to the 30 year bull market in bonds. This is a period of time where tactical interest rate management will be a vital, critical ingredient to protecting capital and generating positive returns in the months and years ahead.