Negativity has become quite fashionable these days among investors. Not without good reason. Soaring deficits, a dysfunctional congress and manipulated interest rates are just a few. But with the debt ceiling crisis averted for now, there are reasons for short term optimism.

We see several catalysts that may facilitate further advances for equities and especially corporate high yield bonds into the end of the year.

Low Down on the Shutdown.

First the bad news. The U.S government is a large contributor to the economy and the shutdown will certainly have a negative impact on fourth quarter growth. Analysts are already downgrading fourth quarter GDP expectations by an average of 0.5%. The silver lining however, is it is highly unlikely the Federal Reserve is in a position to taper its asset purchases until well into next year.

In response to the shutdown, Federal Reserve Bank of Dallas President Richard Fisher stated it is “hard to now argue to change course of monetary policy”. That is a complete reversal of stance for Mr. Fisher from just six months ago. Recall that it was Fisher who first suggested it was time to begin the tapering of the stimulus in May. His comments ushered in one of the steepest declines in bond prices on record, creating havoc for fixed income investors this year. With QE3 continuing in full force, we see the yields on the 10-year U.S. Treasury note declining, and bond prices rallying back to levels near the May “Fed Tapering” comments.

High Yield and equities are historically highly correlated. When they diverge, there is often opportunity. We pointed out a negative divergence in May, and issued a warning about excessive optimism. You can read the commentary here. The S&P 500 proceeded to fall nearly 6% before bottoming six weeks later. Higher risk sectors like Emerging Markets fell nearly 15%.

Now we see opportunity for High Yield to out-perform. With the support of Fed stimulus, stock indexes have advanced nearly +20%, while High Yield bond indexes are barely positive. The chart below highlights the divergence that began in May when over rising interest rates fears began to emerge.

Equities and High Yield in 2013 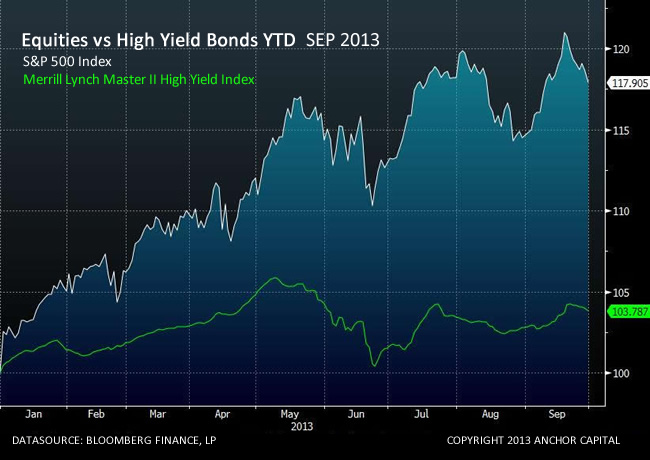 Our opinion is that rising interest rates, not default risk, has been the biggest contributor to the lack of performance in High Yield bonds this year.  With the threat of Fed tapering on hold for now, we see a catalyst for High Yield bonds to play “catch up” as we enter the seasonally strong portion of the year. This isn’t to state there are no risks. Another debt ceiling standoff is less than 90 days away, there are rumblings from China about slowing its purchasing of our debt, and earnings growth is deteriorating. These will be just a few of the headwinds in the coming quarters.

While our risk models warned of increased volatility in May, now they are warning the risk for now is in being too pessimistic.